The Battle of Limestone Station historical marker was placed Friday at the intersection of David Crockett Road and Old State Rt. 34 during a dedication ceremony. The marker commemorates the September 8, 1863, skirmish at Limestone Station between the 100th Regiment Ohio Volunteer Infantry and Gen. Alfred E. Jackson’s troops. Anthony Valentine, Civil War Historian, was the marker sponsor. The Historical Marker: 1A 113 BATTLE OF LIMESTONE STATION At a bridge here on September 8, 1863, the 100th Regiment, Ohio Volunteer Infantry, engaged more than 1000 of General Alfred E. Jackson’s men in a short skirmish. Out of ammunition and surrounded, the 100th was forced to surrender. Union casualties were 6 dead, numerous wounded, and over 250 captured. Of this number, 85 died in Confederate prisons. Confederate losses were not reported. 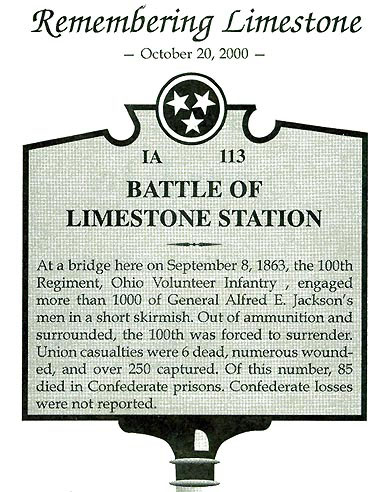 THE BATTLE OF LIMESTONE STATION

On August 29, 1863, Landon C. Haynes, Confederate Senator from Tennessee, telegraphed President Jefferson C. Davis: “The Federals have taken Knoxville. By this time East Tennessee is surrendered. Bragg’s army is separated from upper East Tennessee. From Knoxville up to Abingdon, VA., is held by a very small force.” Haynes asked for protection from the iron, niter, salt and lead industries in the area so crucial to the Confederate war effort. “Can it be done?” he asked. “I earnestly urge it.”

The “very small force” Haynes mentioned consisted of two small brigades, one under the command of Brig. Gen. John W. Frazer, stationed at Cumberland Gap, and another commanded by Brig. Gen. Alfred E. Jackson, of Washington County, scattered along the East Tennessee and Virginia Railroad. Frazer’s brigade was soon surrounded by Union forces commanded by Maj. Gen. Ambrose E. Burnside and surrendered on September 9. The defense of East Tennessee would depend on Jackson’s brigade and whatever support could be spared from Confederate forces in Southwestern Virginia.

Jackson’s brigade consisted primarily of a regiment and battalion from Thomas’ Legion, mostly men from the mountains of western North Carolina, the 16th Georgia Cavalry Battalion, Captain William H. Burrough’s Light Artillery Company and portions of two dismounted batteries. Jackson was ordered to retreat to Bristol to await reinforcements, arriving there September 3. A small force of artillery and infantry under the command of Captain Hugh L. McClung was left behind to guard the bridge at Carter’s Depot in Watauga.

In the meantime, Federal infantry pushed forward on captured trains to Jonesboro, arriving there on September 5, where a small skirmish ensued with Rebel cavalry, during which the Richmond Enquirer reported: “Two females were wounded by the Yankees in the encounter.” The Federals went on to Watauga, their commander demanding the surrender of Carter’s Depot, “In the name of Maj. Gen. Burnside,” which Captain McClung promptly refused, whereupon the Federal troops retreated back towards Jonesboro.

Major William Stringfield set out from Carter’s Station on September 6, as recorded in his dairy: “Jonesboro. At daylight this Am I took 75 cavalry and started in search of the Yankees – but ‘nary Yank’ do I see; I first galloped through the town – midst the smiles and cheers of beautiful women and waving of handkerchiefs. I remained in town all day and on Picket below town most of the night.”

From Bristol, an anxious Gen. Jackson wired Lt. Col. James R. Love at Carter’s Station: “Urge the holding of Carter’s Depot at all hazard but if it should have been given up hold on to Zollicoffer to the last. Large reinforcements are coming.” The regiment commanded by Love had spent most of their service guarding bridges and on provost duty and Love probably spoke for his men when he sent a courier back to Jackson with the message: “Push forward the cavalry and let us have some fighting. The force of the enemy at Jonesboro cannot be more than 400.”

The Union regiment that Love’s North Carolinians would soon be fighting was the 100th Ohio Infantry. Like most of the men of Jackson’s brigade, the men of the 100th had seen little or no action. Organized in and around Toledo, Ohio, from July to September of 1862, the regiment had seen plenty of hard marching in Kentucky, mostly in response to Confederate cavalry raids. But for the regiment and its commander, Edwin L. Hayes, this was to be the first real fight.

When the retreating Federals realized the rail route to Greeneville was blocked by a burning railroad trestle, the 100th Ohio halted at the old Embree stone house at Telford and began digging in, to guard the rail line and wait for reinforcements.

Jackson, meanwhile, had been reinforced by the 4th Kentucky Cavalry, under Col. Henry Giltner, the Schoolfield’s battery. Jackson arrived at Jonesboro on the 7th. The next morning he sent the 4th Kentucky Cavalry and Lt. Col. Love’s North Carolina infantry to attack the 100th Ohio at Telford. The fighting was brisk, with Jackson sending orders back to Jonesboro to send forward two companies of William C. Walker’s battalion, which had been held in reserve.

The Federals were driven back some six miles to the bridge at Limestone Station, and Jackson sent a message to Lt. Col. Milton A. Haynes at Jonesboro, which he received at 8:00 to bring Walker’s battalion and the artillery. Haynes arrived at Telford’s Station, “where we had the battle of the morning, we saw our wounded and heard that the enemy were in retreat, and that General Jackson was in pursuit.”

Lt. Col. Haynes continued: “No knowing what direction friends or foes had gone, we pursued in a gallop, and at about 9:00 we heard the discharge of artillery at Limestone Bridge. Pursuing our course as rapidly as possible, we soon came to the scene of action and placed our pieces in battery. At that moment Col. Giltner, of the Kentucky cavalry, with his men, dismounted, was engaged with the enemy on the opposite side of Limestone Creek, cutting off communication of the enemy by railroad south.

“Soon after Col. Walker came up with his men, who had marched at double-quick time 12 miles. At my suggestion they were ordered to lie down and rest for 30 minutes, and during that time the enemy’s sharpshooters were firing upon our battery, and we were amusing them by a few discharges of spherical case-shot.”

Lt. Col. Haynes described the battle from that point: “As soon as Col. Walker’s men had rested, they deployed as skirmishers to the left to clear the woods and Major McKamy’s battalion on the right to sustain the battery. (The enemy) at that moment had possession of a skirt of woods in front of the block house and stone and brick buildings occupied by them as barracks, distant about 1,000 yards from our position. The infantry, advancing as arranged, charged the enemy’s skirmishers, the battery covering them by throwing case and canister into the woods occupied by them.

“With a shout and hurrah for the Bonnie Blue Flag, the North Carolina boys made the charge and the enemy fled before them, the enemy being now within the block house and other houses, were pouring upon us a shower of mini balls. When we had driven the enemy into their last retreat (Col. Giltner, with his gallant Kentuckians, accompanying to the other side of the creek), I brought the guns of Burrough’s battery… into position, and opened fire upon them with spherical case and canister shot, Col Gilner’s small rifled guns, joining in the action. The enemy in the meantime kept upon us a very sharp fire of small arms (Enfield), and then …a white flag appeared.”

Major Stringfield reported in his diary that “after a stubborn fight of two hours we captured 290 prisoners, 30 wounded and 20 killed of them. Our losses six killed and 15 wounded. I took a splendid sword from the commander…also a good gum cloth. The enemy fought well (and) were evidently commanded by a veteran.”

Of the 100th Ohio only a few escaped capture. Local historian John Fain Anderson wrote of an interview with Nolichucky River ferryman Nicholas Earnest, who helped the men escape. Earnest “crossed them over and took their names down in his book -35 of them – all most entirely exhausted, the worst besmeared men he had ever seen.”

After the battle, the Ohio troops were placed aboard a train bound for the prisons in Richmond. The North Carolinians and Kentuckians lost little time in replacing their weapons with the new Enfields captured from the Federals. Washington County native Col. J.L. Bottles who was very familiar with the Limestone area was mentioned in official reports as “among the men who by their gallantry contributed to this result men whose bravery could not be exceeded.”

The main result of the Battle of Limestone Station was the morale boost and badly needed equipment it gave the men of Jackson’s command who had long been described in official reports as “utterly unreliable.” Union commanders would never again underestimate Confederate capabilities in upper Tennessee, and lost little time in mounting another attack, this time with a sufficient force of cavalry. Northeast Tennessee, however, with brief exceptions, would remain under Confederate control until the spring of 1865. 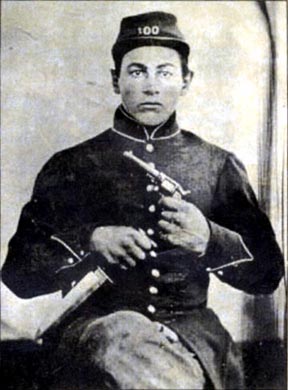 The real tragedy of the Battle of Limestone lay with the Ohio men who were captured. While the rest of the 100th Ohio went on to fight at the siege of Knoxville, the Atlanta campaign and the battles of Franklin and Nashville, those men who were originally sent to Confederate prisons in Richmond, were later transferred to the dreaded Andersonville Prison. Eighty-five men of the 100th Ohio Infantry would die in Confederate prisons.

Abraham Hoofnail was captured at Limestone Station on September 8, 1863. He was sent to Andersonville Prison and released. He died on the steam ship Sultana on April 7, 1865.

Newspaper article about the situation in Tennessee leading up to the battle.