Jonesborough, the oldest town in Tennessee, is located six miles southwest of Johnson City just off US11-E. Founded in 1779, the town is a living community restored to its 19th century look and offers a glimpse into two hundred years of history. The Great Stage Road down Main Street begins an unforgettable journey through this Historic District paved with brick sidewalks. A variety of architectural styles are represented in the many original buildings.

The Veterans Administration Medical Center was first established in 1903 as “The Mountain Branch of the National Home for Disabled Volunteer Soldiers.” The concept of a “Home” or domiciliary for Union soldiers was conceived by President Abraham Lincoln during the middle of the Civil War, and the first such home was built in Togus, Maine in 1866. 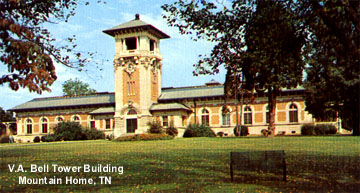 Mountain Home was the ninth of only eleven such homes. It was established by an act of Congress on January 18, 1901 through the efforts of Congressman Walter P. Brownlow and others.

The Mountain Branch was built on its present site following acquisition of several tracts, totaling roughly 450 acres. The Congressional Act authorized $2.1 million for all construction. The National Homes in that era were designed primarily as domiciles rather than hospitals, with the hospitals intended as “infirmaries” for the care of members of the home who became acutely ill. Mountain Home, typical of all such veterans homes during this period, had a greenhouse, laundry, steam and electrical generating plant, various repair and maintenance shops, and a large farm to grow its own produce and raise livestock. The grounds also housed a fire department, stable, police force, a zoo, large theater, a library, a bandstand, a baseball field, a crude sewage disposal system, a hotel, two lakes, and a chapel housing both Protestant and Catholic Services.

The Center Hospital operation gradually changed from predominantly long-term care to that of a smaller, more acute care hospital. A nursing home care unit of 58 beds was activated in 1965. In the mid-1970’s the East Tennessee State University Quillen College of Medicine was given a home on the grounds and became affiliated with the Veterans Administration. The Center remains a major factor in the economy and health care of the area.

Salem Presbyterian Church, organized in 1780 by the Rev. Samuel Doak, is located on the campus of Washington College Academy, Limestone, TN. The church was placed on the Register in 1992. Architect was A. Page Brown sponsored by Mrs. Cyrus McCormick. The present building was constructed in the 1890s. It is a Romanesque revival style of brick with beautiful stained glass windows.

Haynes who received the estate as a wedding present in 1839 renovated the home and developed the complex much as it appears today. He was influential in bringing the railroad through Northeast Tennessee. Following the Civil War, the Haynesville site was renamed Johnson’s Depot. In 1869 it became Johnson City.

Annual Events
Spring Doin’s, Civil War Reenactment, 1st weekend in May
Times of the Tiptons, Battle of State of Franklin, 2nd weekend in September
Stories from the Pumpkin Patch, Last Saturday in October
Visions of Christmas 1861, 2nd Saturday in December

Over 25 homes, sites, buildings and historic districts are on the National Register of Historical Places. The homes range from the two-story log house of Christopher Taylor built in 1776-1778 to Shelbridge, built in 1920 and home of the current President of East Tennessee State University.

The Jonesborough, Broylesville, and Knob Creek Historic Districts; Sulphur Springs Methodist Campgrounds; grist mills (Jeremiah Dungan-1778 and Henry Bashor-1838); and other sites and structures are included on the National Register.

Located at the corner of East 11th Ave. and N. Roan Street, Johnson City, TN. Since the mid-70’s, the house has been home to the president of East Tennessee State University. Built in 1920, the 2 1/2-story house was designed by Architect D.R. Beeson and constructed by contractor Mark Curits for the Ross Spears family. It was sold in 1927 to the Henry and Shelby Bridges family. Henry Bridges died in 1957, Mrs. Bridges died in 1973. The house was sold to the state for the official presidential residence. House was admitted to the Register in 1996.

Boundaries for the historic designation are primarily West Maple Street to the north, Poplar Street/Cedar Place to the south, South Roan Street to the east and University Parkway to the West. Also included are Franklin and Boyd streets, Laurel Avenue, part of Virginia Street and West Chestnut Street between Spring Street and Roan. About 450 residences – roughtly two-thirds – contribute to the historic district. A contriubting residence is one that is at least 50 years old and has had no “significant” alteration to the exterior.