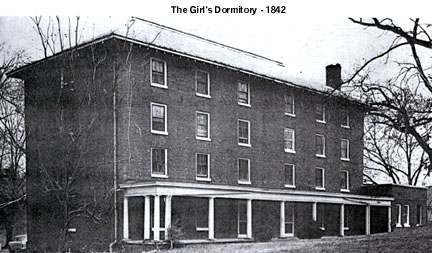 The school was chartered from NC in 1783 as the first organized school west of the mountains. It was first named Martin Academy after Gov. Alexander Josiah Martin, Gov. of NC. The State of Franklin granted a similar charter in 1785, as did the Territory of the US South of the River Ohio in 1795

Samuel Doak established Salem Church in 1779 and this first school of classical learning in 1780. Doak, a Presbyterian minister and educator, also founded nearby Tusculum College in Greeneville in 1818. He set the precedent as president of school and pastor of Salem that lasted until 1952.

His son, Rev. John W. Doak, a 1796 graduate, became his successor and 2nd president of Washington College; another son, Samuel Witherspoon Doak was vice president of the College. The private and subscription school was for those who could pay the tuition.

During the Civil War, buildings were burned or damaged; books disappeared. The present girls’ dormitory was used as barracks by soldiers of both armies. It was forced to close for several short periods between 1856 and 1875. Records indicated that from 1866 to 1868, it was the Washington Female College. Problems of the school throughout its history have largely been financial ones

Rev. J. W. C. Willoughby, the 14th president (1881), and his successor Rev James Cooter, restored the campus. A self-help plan required students to work outside the classroom. Cooter was followed by Dr. Hubert S. Lyle, then by John Milton Scott, secretary of Board of Trustees

About WW I, it served as a county high school for students from that area in Washington Co. in return for financial aid from the county. This agreement was in force until 1971 when the school returned to private status. Since 1923 the focus was only on high school work.