The Washington County Court Minutes contain information on the County Poor House or Poor Farm. In the January 1895 term of County Court, the sale of the county farm was approved and a committee appointed to look into the matter. 1 April 1895 the committee reported the farm was approximately 11 miles from Jonesboro, containing 230 acres. “The soil is thin but will produce worth $12.00 per acre.”2 The old County Farm was divided into 3 sections for sale. Thirty acres on the east at $8.00 per acre, 25 acres on west at $10 per acre, and 175 acres remained intact. 3 October 1896, Commissioners authorized the sale of the Old County farm.4 Mr. H.A. Dickerson from Pulaski, VA bought 178 acres, Mr. J.A. Keys bought 40 acres which bordered land owned by F.H. Cockran, heirs of Wm. McClackin, Jas. McMackin and heir of N. Harrison. Another part was purchased by Lewis Cooper. 5

Source: Information found by Donna Briggs and Betty Jane Hylton who were in the Jonesborough Courthouse looking for a list of people who died at the County Farm (Poor House). 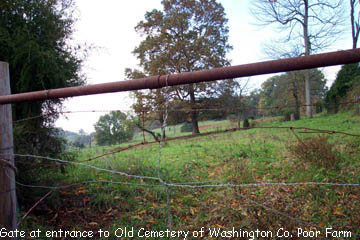 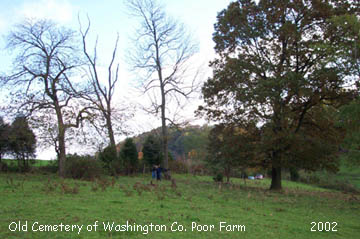 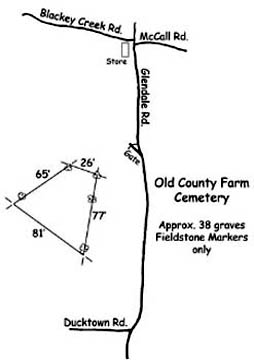 Diagram of Old Cemetery at the Poor Farm

Apparently there are 38 graves. The cemetery is 81’x77’x26’x65′. The fence is no longer standing. Livestock and wildlife have trampled the area. Mr. Bill Rector owns the land surrounding the cemetery. His father bought the land from the Keys heirs. Mr. Key’s father had owned the land before him. The deed has the cemetery area set aside.

July 1895, a new tax levy was set at five cents per $100 of property for the New Asylum for the Poor. Commissioners appointed to locate new property and take bids for a suitable building were Dr. J.L. Clark, Geo. M. Farnham, Geo. E. Clark.6 In October 1895, the committee recommended the purchase of the M.H. P. Panhorst property, formerly owned by John Simpson, deceased. The property was priced at $20.00 per acres and was located 3 miles south of Jonesborough in the 15th Civil District.7 Plans for the new building were approved with revisions during the January 1896 term.8 During this same term, the building committee for the New County Asylum reported that seven bids were received. Lyon & Cooper contractors bid $2275, which was approved 9 October 7, 1896, the building is completed.10

Death and Obituary Notices from the Jonesboro Herald and Tribune.
Volume VII, #24, 9 Mar 1876
Died: Daniel Coleman, well known by everyone in this place, died at the Poor House last Tuesday.

In 2004 the Washington County Farm closed the doors. It was the last operating County Poor Farm in the state of Tennessee. Throughout the Court Minutes, it is found that the County paid individuals to keep the poor in their homes. 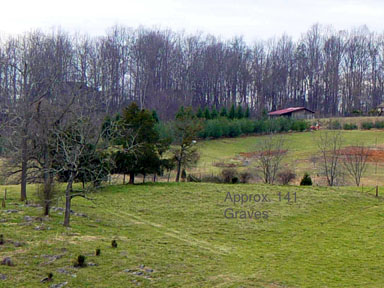 Approximately 141 graves are in this cemetery.

Prior to 1986, burials were in a cow pasture (with no markers) at the County Farm, 330 County Farm Road, Jonesborough, TN. The cemetery was surveyed by Donna Briggs, and Betty Jane Hylton on December 30, 2002. Evidence of one hundred and forty-one graves was found. There could be more undetectable graves. Not all residents were buried at the County Farm Cemetery. Several were taken to family and church cemeteries.

Update: 8 November 2014, Gordon Edwards, Robert and Betty Jane Hylton surveyed the cemetery. An area has been fenced but approximately 36 feet or 4 more rows of graves are to the east of the fence. No additional graves were found north or south of the fenced area. There have been stories about Blacks being buried in a separate cemetery. Northeast of the fenced cemetery is a rocky knoll with graves. This could be where the Blacks were buried or it might be a family cemetery used by previous owners of the property. 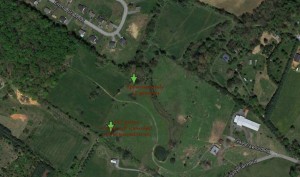 After 1986, residents were buried at 116 Frank Hardin Rd., behind Mt. Zion Baptist Church in Section 3 of the Mt. Zion Cemetery, Jonesborough, TN.