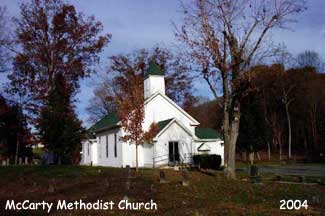 In 1821 Philip McCardle (whose granddaughter, Eliza, married Andrew Johnson, future President of the United States) deeded one acre of ground to Henry Ruble, Isaac Hair, John G. Ruble, and Robert Paine, trustees, to be used for a Methodist Episcopal church and cemetery. Subsequently a log structure was built on the site. The log church building was also used as a school for many years. Originally, the church was known as McCardle’s Meeting House, but over the years the name became “McCarty.” In 1866, a frame church building was erected. During the early years, ministers held services at the church on the first Sunday of each month.

Information about the Old cemetery and New cemetery is in the cemetery section.