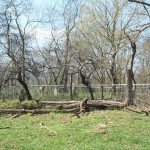 In the Lamar Community, turn off State Highway 81onto Taylor Bridge Road. Travel 8/10th of a mile. Turn left through a gate at the barn. Go around the barn and bear right through a gate. Continue up the hill to the top. It is between Cherokee Creek and the Nolichuckey River. The cemetery has a chain link fence around it.  There are at least 15 fieldstones marking graves and several with no markers.

Thanks to Dave Denis for his work cleaning off this cemetery.

Down the hill from the fenced cemetery toward Cherokee Creek, is the slave cemetery. Many unmarked graves.

**Louisa Brown, daughter of Bird and Louisa Rebeka Brown, born January 14, 1842 and died September 21, 1923. She was married first to Shelby McDowell Deaderick, who was killed in the Civil War and married second to George C. Ward.

Elizabeth and Jacob Brown were married February 8, 1786 at the home of Ruth Brown, the widow of Jacob Brown, I, by William Clark, J.P.

Louisa Rebeka Sevier Brown was the daughter of John Sevier, Jr. and his wife, Sophia Garrette. She married Bird Brown. He was the seventh child and third son of Jacob Brown, II and Elizabeth Bird Brown.

*The Kings Mountain Chapter of the Sons of the American Revolution has marked the graves of Jacob Brown, Sr. 8 May 2010 and Jacob Brown, Jr. 2 October 2010.