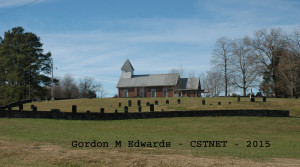 From volume 3, page 315 – entry 148
“Providence Presbyterian Church, located Route 1 Limestone on the Washington-Greene County line, is the second oldest church in Washington County. It was organized in 1780 by the Rev Samuel Doak. On Aug. 21, 1783, the Rev Sam Houston was ordained—the first Presbyterian minister to be ordained in Tennessee. Land records show that the Rev. Houston owned land in front of the church. He married a Miss Hall, who died a few months after their marriage and was buried on his land as shown by the deed. In 1795 HOUSTON married Margaret, daughter of Joseph Walker. Later he returned to Virginia where he pastored churches for more than 40 years—1791 until the 1830’s. he died Jan 20, 1839, aged 81, and is buried in High Bridge Cemetery. Copied April 3, 1958 by Charles M. Bennett. Notes from the files of CMB and from Irma Bowman Kitzmiller.”

This burial ground is being maintained very well and is managed by an association.

BURIALS – This cemetery is divided into two areas –

The old area is north of the church building and surrounded by a limestone rock wall. This area is no longer active, appears nearly full, and has been divided into several smaller sections for surveying purposes. Only graves with markers have been recorded. See aerial map for breakdown of sections. Row numbers go south to north (away from the church building) and grave numbers go east to west within each section.

The new area is south of the church building and surrounded by a chain link fence. This area is still active for burials. It has been divided into two sections for survey purposes – east/left of the driveway is labeled Section L and west/right of the driveway is labeled as Section R. Rows go north to south (away from the church building) and grave numbers go from the driveway outward. Rows were given alpha indicators to match cemetery records. On the east/left side, a short row is found between rows H and I. This row is noted as HS in cemetery records and this survey. The cemetery association has a good mapping of the new area, so the grave numbering coincides with that map. This presents survey numbers being skipped for graves that have not been used yet.

A handful of markers recorded in the survey from 1958 were not found. These have been included and are labeled as CNL (cannot locate) in the Row column. Other older markers have deteriorated since the 1958 survey and bits of information may no longer be legible, however, as long as the marker could be identified, all the data was included in this survey. 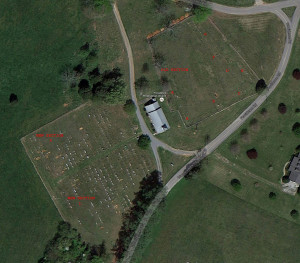