Decatur County was divided concerning the issue of the Civil War. There were 550 votes opposing separation and 310 votes for separation.

The second company was raised by Jonathan Luton. It became part of the 31st C.S.A. (West Tennessee) Regiment. A. H. Bradford served as Colonel, C.M. Cason served as Lt. Colonel, and John Smith served as Major.

The 2nd company raised was the Tennessee Mounted Infantry raised by Andrew Roberts. Company A began service in 1863 and by 1864 this regiment had 7 companies. This regiment was involved in fort duty, scouting for stragglers, and preventing CSA recruitment.

Decatur County was comparatively free from marching armies and widespread destruction. The residents did, however, suffer from predatory bands of irregular calvary or roving bands. The landing at Perryville was used by Nathan Bedford Forrest to cross his army and he came through Perryville another time on his way to Jackson.

This information is taken from Goodspeed’s History of Tennessee as told in the biography of H. M. Jordan.

Hiram Jennings, born August 23, 1811, was hanged on December 2, 1863, by a party of men calling themselves Texas Rangers. They stated as their reason for doing so that, they had been captured by Federal troops 2 months previous while taking breakfast at Mr. Jenning’s house. They accused him of having reported them. After hanging Mr. Jennings, they burned the house.

A skirmish occurred on Nebo Hill. Nearby was a stage coach stop known as Red House. The shots from the skirmish on the hill hit a man who was working in a field. He was carried to Red House. Blood stained the wall of the living room and stairway. It has been considered by some to be a “haunted house”.

“… passing through Howesville, and thence east to the house of a noted secessionist named Conrad. I arrested him and his 3 brothers on the evidence of Dr. Ganess, who states that they have been aiding and abetting the parties of guerrillas in the vicinity. In the morning, I proceeded toward the river… I then moved my command toward Lexington, on the Broady’s Ferry Road, scouting the country thoroughly for some miles on both sides of the road, arresting 1 man named George Moore, armed with rifle and pistol, and mounted. I also arrested his brother, James Moore. Both of the men bear bad characters, and are strongly suspected of being connected to the guerrillas. ”

The McMurry family remained near Hot Springs until the year 1861, when the Civil War broke out. Thomas McMurry joined the Confederate Army, and was assigned to the army commanded by Brigadier General Earl Van Dorn of Arkansas. His last request of his wife was that she undertake the journey back to the home of his father in Tennessee.

It is doubtful if there were many women who went through as many eventful experiences as did Pauline [ West ] McMurry in the next few weeks following her departure from Arkansas. When she reached the Arkansas bank of the Mississippi River, opposite the city of Memphis, Tennessee, she found that city in the hands of the Union Armies. She was informed that before she could proceed further that she must go into Memphis alone and take an oath that she would in no way engage in subversive acts against the government of the United States. Leaving her 5 young children, the oldest only eleven [the youngest less than 4] , waiting on the Arkansas shore with scores of other refugees, she entered the city of Memphis. To her consternation, she found that she would be required to wait three days before she could receive a hearing. There was no means of communication with the children across the river, so there was nothing to do except wait.

While the mother was impatiently waiting in Memphis, the five children, under the care of the eldest sister, Frances also were having some experiences of their own. On the second day, two Federal gunboats patrolling the Mississippi saw several Confederate soldiers and officers among the refugees and opened fire upon them.The entire group were obliged to retire to a spot farther away from the river bank, but the firing continued through the night and well into the next day. The mother heard the shelling in Memphis, and knew that her five children were in the line of fire, but under the circumstances, she could do nothing. After taking the oath required by the Federal authorities, Mrs. McMurry was informed that she would not be allowed to travel overland to Decatur County, which is only about 100 miles from Memphis, as the entire portion of West Tennessee adjacent to Memphis was under control of the Union Armies under the command of General U. S. Grant. She was told that the only way she could reach her husband’s old home would be to take the water route, up the Mississippi to Cairo, Illinois to the mouth of the Ohio, thence up the Ohio to the mouth of the Tennessee, hence up the Tennessee to Perryville, Tennessee which was in Decatur County, and only 7 miles from the McMurry homestead. Mrs. McMurry accordingly took passage with the family on a U.S. Government transport up the Mississippi to Cairo. On arriving there, she changed to a private steamboat whose route lay up the Tennessee to Perryville. On arriving at Perryville, and within 7 miles of her destination and home, this pioneer Tennessee mother received another shock. Just before the steamboat reached the dock she was challenged by a Federal gunboat whose captain ordered her not to stop. The captain of the passenger boat pleaded with the officer that he had aboard a mother with 5 small children who had journeyed nearly a thousand miles and were within 7 miles of their destination. The captain of the steamboat [ gunboat ] was adamant and informed the other captain that if he attempted to land anyone, he would sink the steamboat. There was nothing to do except remain on the boat and the captain informed Mrs. McMurry that she could ride with him to Chattanooga and return, a distance of about 300 miles further. This was done and when the boat came back down the river to Perryville exactly the same episode occurred again, another gunboat refusing permission to land. The result was that Mrs. McMurry, after traveling several hundred miles up and down the Tennessee and passing within a few miles of her old home, eventually found herself back in Paducah, Kentucky. Here almost without funds and low in spirits, she encountered an old friend of the family, Judge D. T. Dougherty, who very kindly made arrangements to secure a carriage to convey her overland to her Tennessee home. This last leg of the journey was uneventful until the little group arrived within a few miles of the Decatur County home when the carriage suffered a breakdown. Within a few moments of this occurrence, a small force of Federal troops appeared upon the scene, and the Commander of the troop, after ascertaining the identity of the group and their destination, offered to escort them home. Thus… the McMurry family arrived safely back at their Tennessee home.

Within a few months after their arrival came the sad news of the death of Thomas McMurry who succumbed to a severe illness while with the Confederate Army under General P. G. T. Beauregard shortly after the Battle of Shiloh. He was buried at Tupelo, Mississippi.

Note from R. B.
Thomas was the son of Robert McMurry and Frances Runnels. Robert’s children were : Thomas, Antoinette who married a Laster, John, William, Robert, Mary Ann who married 15 July 1884 to John Jackson Carrington ( my ancestor ), Gilly, and Andrew Jackson.

Robert had a brother, James, who married Gilley Runnels a sister of Frances.

Except From: The News Leader, Parsons, TN 6 August 1997,Page B2
Submitted by Mark Rosson

On Saturday, 28 June 1997, the descendants, their spouses, and other interested persons gathered at 10:30 am at the Union Baptist Church, Chesterfield, to honor their Civil War Ancestor, William Carroll Herndon, by dedicating his marker in Union Cemetery, beside his daughter, Belle Herndon Austin. Beulah Austin Brasher of Decaturville, the only living grandchild, was present with other members of her family. Others present were from Arkansas, Missouri, North Carolina, and Tennessee. The Pastor of Union Baptist Church, Bro. David Walker, gave the opening prayer. He and his wife, Mary Ann, gave a warm welcome to the group. Bobby N. Downs, 2nd Lt. Commander, James M. Keller Camp No. 648, Sons of Confederate Veterans, Hot Springs, Arkansas, was in charge of the program. Five great-great-great-grandchildren carrying flags, marched to the marker to the taped music of Dixie, and stood at attention during the ceremony. Mr. Downs told of Herndon’s going from Decatur County, Tennessee to Pocahontas, Arkansas to enlist in the 38th Arkansas Infantry, as a private in Co. H., under Captain Y.M. Cain and Captain W.A. Black. He Served from 15 July 1862 till the company surrendered 26 May 1865 at Shreveport, Louisiana. Mr. Downs recounted the battles of the regiment and described the hardships and courage of the soldiers. He also described the different flags of the Confederacy. Exie Johnson Green, a great-granddaughter, gave a biographical sketch of William C. Herndon and told of tracing the Herndon family history back to early England. William Herndon was born in May 1838, in Tennessee, the seventh child of William Bryant Herndon and his wife, Elizabeth. He grew up in Decatur County. After the war, he married Elizabeth J. Sallee in Madison County, Tennessee. They had four daughters and one son. After his wife died in Dunklin County, Missouri, he took his children back to Decatur County and later married Nancy Jane Rosson. He died on 05 September 1905. Jeff Johnson, a great-great-grandson who lives in Durham, North Carolina, commented on the continuity of our heritage and the unity that beings us together as a nation. Charles Harrington, a great-grandson from the Middleburg community, said that as we cherish our ancestral heritage, even more so should we cherish out spiritual heritage through Jesus Christ. After the closing prayer was given by great-grandson James Johnson, the flags were retired to the taped music of the bagpipes playing “Amazing Grace”. The many cousins enjoyed getting reacquainted and visiting the graves of other ancestors in the cemetery.

If you have letters to or from Decatur Countians during the time of the Civil War, please consider sending them to be added to this site.

This letter was submitted by Jane Ellis. She said, ” I haven’t figured out who this Martha Akin is yet.” She found the letter in her ggg grandfather John Watson’s Bible.

If anyone knows about this family, please submit info to me or to the Decatur Co mail list.

Dear Uncle and Aunt I take this opertunity of addressing you and to let ou know that we are all injoying amoderate potion of Health at present and Hope when thease lines comes come to hand They may find you All Well and Tell the children all Howdy for me and I would be very glad to sea you all and you must come and sea us as soon as you can. I hurd that brother John was at youre hous very sick and if so I wish you to let me Know as soon as possible and if he is there and is able to travel to come to the river opposite here Where we can see each other as you will not be saf on this side of the River for on the 12th there was 4 or five hundred passed threw from Decatureville to cravens I Heard from father yesterday he was very sick he has the chill and Some of the Rest is Sick also So I will bring my letter to a close so nothing more at present But Remains your Neace until Death.

Check out these resources! 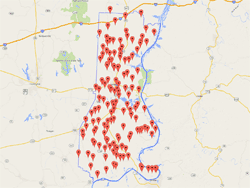