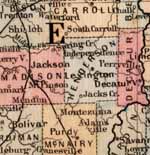 Henderson County is located in West Tennessee, one of the state’s Three Grand Divisions. It is bordered on the north by Carroll County, on the west by Madison County, on the south by Hardin County and McNairy County, and on the east by the Decatur County.  Henderson County was legislated into existence in 1821 and organized in 1822.  In 1845 a southeast corner strip was given for the creation of Decatur County.  In the 1870s, a small tract in the northwest corner was given to Carroll County.  In 1882 a large piece of the southwest corner went to Chester County.  A small tract in the western border was given to Madison County in the 1880s.

Henderson County was named for Colonel James Henderson, who commanded Tennessee troops at the Battle of New Orleans. He also was on General Jackson’s staff during both the Creek and Natchez campaigns. The site chosen for the county seat was near the county’s center, close to Wilson Spring Branch, and was named Lexington in honor of Lexington, Massachusetts, where the first battle of the Revolutionary War was fought.

We have built a new Henderson Co. TNGenWeb site building on the great work started by David Donahue and Brenda Fiddler which continues today as www.tnyesterday.com.  We hope you like the new format and content.  Please contact me if you would like to share your genealogical or historical research with other researchers via this web site. 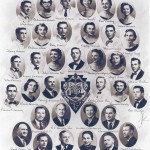 A DVD containing the composite pictures of graduates of Scotts Hill High School from 1930 – 2011 are now available for purchase.  Check here for ordering details. 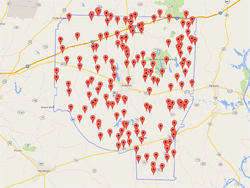