Cannon County lies almost exactly in the center of Tennessee, approximately half way between Chattanooga and Nashville. It contains an area of some 270 square miles and was created on January 31, 1836, from parts of Rutherford, Smith, and Warren Counties. The original bill (as drafted) named the County, “Marshall”, after Chief Justice John Marshall, but before its passage, the word “Marshall” was penned out and the word “Cannon” was inserted, for Newton Cannon, the governor of Tennessee.

In 1837, a portion of Northeastern Cannon Co. was used in the forming of the new Dekalb Co., and in 1838 a portion of Wilson County containing the area around Auburntown was added to Cannon. The County is bounded on the west by Rutherford County, the north by Wilson and DeKalb Counties, on the east by Warren County, and on the south by Coffee County. 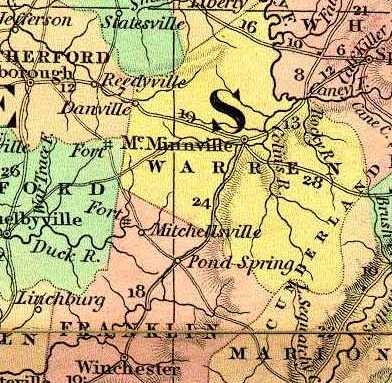 A section of H.S. Tanner’s 1834 Map of Tennessee, showing
the area that became Cannon and Coffee Counties, in 1836.

The Cannon County TNGenWeb Project makes no claims or estimates of the validity of the information submitted and reminds you that each new piece of information found should not be taken at face value, but should be researched and proved or disproved by weight of evidence. Among the items you will find are copies of copyright-expired texts pertaining to the history of Cannon County, Tennessee. These must be considered in the era that they were written. You are welcome to copy information found at the Cannon County TNGenWeb Website for personal use and share information with other researchers or genealogical organizations, but this information may not under any conditions be sold or used in a commercial project without expressed prior written permission.

The information presented in this web page is covered by United States and International Copyright. Don’t take it and publish it as your own. This site may be freely linked to but not duplicated in any fashion without written consent.

I have recently become the Cannon County Coordinator and would like to invite those that have connections to Cannon County to please submit ideas of what you would like to see and might help you in your research. Please forward suggestions to  lynnt.tngenweb@gmail.com