John White (1751-1846) was a Revolutionary War soldier, fifer, surveyor, and frontiersman. In 1789, John left Amelia County, VA, and moved his family to the Cumberland Mountains in what is now Tennessee. John had to fight the Cherokee Indians for the right to live on the land, for the Cherokee were not confined to the Cumberland Plateau until the 2nd Treaty of Holston in 1791. By 1800, dozens of new settlers had come to the “Mountain District”, including more kin of John White.

Meanwhile, the movement West continued. In 1785, a highway was opened between Knoxville and Nashville, and hundreds of settlers passed through the area. Bon Air Springs, on this highway, developed as the first resort area in the South. Further settlement led to the establishment of the town of Sparta in 1802.

In 1806, a petition for county organization, signed by 155 residents, was presented to the General Assembly in Knoxville. On Sep 11, 1806, White County was formed, partitioned from Smith and Jackson Counties. It was a huge area, encompassing all of what is now White and Warren Counties, and parts of the counties of Cannon, Coffee, DeKalb, Franklin, Grundy, Putnam, and Van Buren.

Over the next few decades, White County was itself partitioned, causing the eventual move of the County Seat from it’s original location near the White homestead to Sparta, where it remains. Because of this partitioning, early research should also include Putnam, Van Buren, and Warren counties.

It should be noted that, while the state of Tennessee accepts John White as the person after whom White County was named, some genealogists have asserted that the county was actually named after James White, the founder of Knoxville. 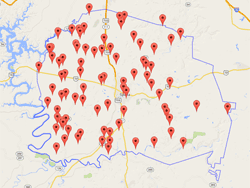