This index lists people from DeKalb County who filed claims with the Southern Claims Commission from 1871 to 1873. These Tennesseans claimed their property had been taken by United States military personnel for use in the Civil War.

The claim files include interesting detail about people and about the Civil War period in Tennessee. Each claimant was required to describe his losses in detail, and to prove his loyalty to the Union. Witnesses gave testimony in support of his allegations. The paperwork in the files is often extensive.

All of the Southern Claims Commission files are located at the National Archives, but the disallowed and barred claim files have been microfilmed and are also available at the Tennessee State Library and Archives.  Allowed claim files are available only by consulting the National Archives, Legislative Records Division, 8th & Pennsylvania Ave., Washington, D.C. 20408.

This index is based on volume 55 of Record Group No. 56, General Records of the Department of the Treasury, at the National Archives.  It is duplicated on National Archives microcopy M-87, reel 13.  The indication of whether the claim was allowed, disallowed, or barred is based on the book Southern loyalists in the Civil War : the Southern Claims Commission by Gary B. Mills (Baltimore: Genealogical Publishing Co., 1994). 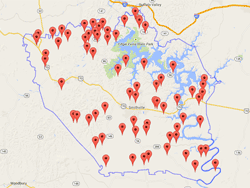