Coffee County was formed on January 8, 1836, from parts of Franklin, Bedford, and Warren Counties. It was named after Gen. John Coffee, a close friend of Andrew Jackson and a hero of the War of 1812 and the Creek (Indian) War. Many in the Legislature wanted to name the new county “Webster”, in honor of Jonathan Webster, the Speaker of the Senate and a resident of the Noah community. In the end the name Coffee won out by one vote. 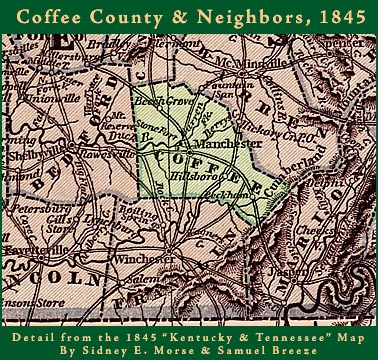 A small village, “Mitchellsville” was already in existence near the proposed site for the new county seat, but when the new county was formed, it was renamed “Manchester” after the industrial city of Manchester, England. Because of the abundance of water power, provided by the “Little Duck” & “Big Duck” Rivers, which flow through Manchester, it was hoped that it also would become a great industrial city. Another small village existed about a mile to the west, near the junction of the two rivers. Called “Stone Fort”, because of the nearby Indian Site, The Old Stone Fort, it already had several water powered milling operations, by 1836-40. In 1836, Coffee County also contained the Pelham Valley and much of the land that was later split off to become Grundy County.

Because of its proximity to the center of the (total) county & its size, Hillsboro (then called Pond Spring) gave Manchester a close run, as County Seat. Hillsboro was actually somewhat larger than Manchester, at that time.

Another significant town in Coffee Co. was Tullahoma. Originally a small village at the junction of the main NC & St.L Railroad & the Sparta Branch line of the Railroad, it much later became an important industrial & scientific research center, & Coffee County’s largest City.

This entire area consisted mostly of small towns and villages, during the 1800s and most of the early 1900s. During the Civil War, both towns in the county were occupied first by Confederate then later by Union Forces. The only major battle fought here was near Beech Grove, in the Northwestern corner of the county. In June, 1863 Union forces armed with the new 7 Shot Spencer Repeating Rifles, advanced from Murfreesboro into Coffee County and clashed with Confederate Troops guarding the pass there. This marked the 1st time in history of the use of repeating arms, in battle and even though outnumbered, the union troops quickly routed the defenders (More on this Campaign).

Communities no longer with us include……..

Events occured in Coffee Co., during WW II and the years following, that changed forever, its previous path of small time country life. To find out exactly what , please continue with………. WW II and Arnold Center.

Ray Amos is your county coordinator.